skip to main | skip to sidebar

A Brush with History

So one of the fun things about living in New Hampshire is the quadrennial circus we host each primary election season. You never know when you'll be sitting around a coffeeshop and a Next President of the United States Wannabe swoops down upon your location with a bevy of aides, a phalanx of secret service and a ....er, whatever it is the Press congregates in - maybe an Estate of Media....

Needless to say, once this happens, you don't get coffee for a while.

Yesterday, our little town of Newmarket was graced by the presence of HRH Hillary Clinton, Esq. After speaking up the road for hours at UNH, she made a 30 minute meet 'n greet stop at "my" coffee shop, Crackskulls. Which, of course, was packed. I was stuffed between a jolly ex-stockbroker who was handing out ONE bracelets and a pair of women who were visiting from Florida and just happened to be in town. (Note to Floridians: Maybe the light down there is different, but just making your front crowns as white as possible isn't fooling anyone....)

So here's a snippet of said interaction in today's New York Daily News. Check it out.
(1/08 note: I don't think the above works...but check out the following!)


I wasn't trying to be mean-spirited, but I suppose "gently joshing" is fair enough, and it does have a charmingly alliterative ring to it. Basically, towards the end of the meeting, Hillary was standing near the counter (notice my homie Michelle in the pic from NYD!) and some older guy was chatting about healthcare.

Hillary: "That's why we need to focus on evidence-based medicine (here I clapped, so she'd know I was all educated about that stuff) and more preventive things, such as monitoring blood pressure, diabetes, mental health and..." (here she pauses, lost for a moment in thought...)

Hillary: "Sure! Dentistry! Oral diseases are very preventable, but 25% of children in this country have untreated cavities."

Me: "Insurance companies want to divorce the mouth from the rest of the body."

Hillary: "Which needs to be corrected, since the latest research is demonstrating the connection between gum disease and heart disease."

Let it not be said that Mrs. Clinton doesn't do her homework.

I mean, seriously, if she were talking to a pile of dentists, sure, or even doctors, but even my most educated patients are surprised when we discuss that research. (It's actually gotten a lot of press from Colgate, but despite using Brooke Shields in their ads, the topic isn't as sexy as, say, MRSA.)

Hillary: "Are you a dentist?"

Me: "Yep, I practice next door. Have a toothbrush!"

Let it be noted here that I told the Secret Service guy before hand that I'd be giving her a packaged toothbrush, which had been protruding out of my front shirt pocket in a way that may have made Sen. Clinton wonder if I was just kind of OCD.

Hillary: "Thanks!" (Holding up brush, smiling for cameras, and looking oddly like the Orbit gum lady: 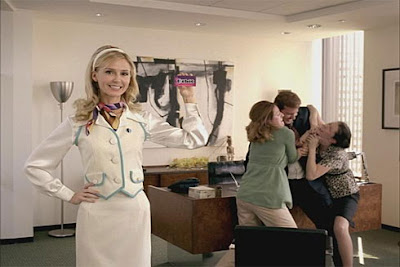 Me: "Also, the brush is made from recycled yogurt cups and when you're done with it, you can mail it back to the company where they'll convert it to plastic "lumber" and make playground equipment."

Hillary: "That is remarkable."

Dr Nate
My unique perspective: a doctorate in a relatively esoteric profession, in which I'm currently the President of my state dental society chapter. However, I'm also still "just" 31 and reasonably tuned into pop culture. Name check: Spongebob, Jon Stewart, Harry Potter, the Killers... Furthermore, I currently work for a non-profit clinic, as well as my private practice. Which is...different. :)